Popular Fuji singer, Adekunle Gold is living proof that money does change the way one thinks and acts.

This morning, the sinner crooner took to Twitter to share how poverty almost destroyed his mentality. According to him, the things that he veraciously used to criticize in the past are things that he is in love with now.

Without sugarcoating his words, he thanked SAPA for almost ruining his life.  One of his fans also concurred with his story and decided to share his SAPA story. He recounted how he wouldn’t buy the expensive things he is spending his money on now if it were to be in 2015.

AG baby only laughed it off and advised him to live, laugh and love. 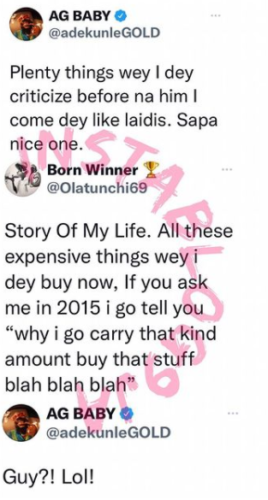