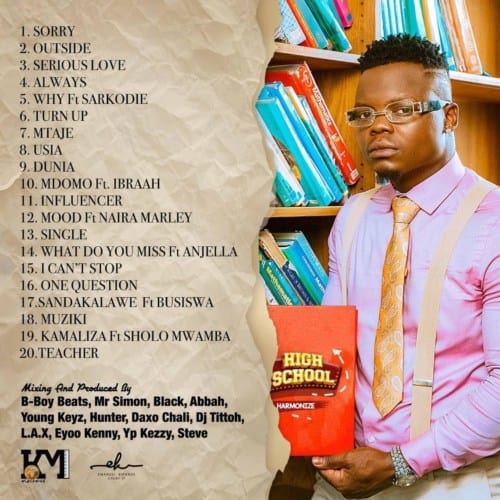 Harmonize is a Tanzanian singer, songwriter, and dancer whose bright fusion of bongo flava and catchy Afro-pop helped establish him in the African mainstream in the late 2010s. As a solo artist and multi-instrumentalist, he has earned particular acclaim for “Kwa Ngaru,” one of several collaborations with Diamond Platnumz, as well as his expansive 2020 album, Afro East, which featured guests like Yemi Alade and Morgan Heritage.

Born Rajabu Abdul Kahali and sometimes known as Konde Boy, Harmonize debuted in 2015 with “Aiyola,” a sunny and melodic single which he followed up in 2016 with “Bado,” his first collaboration with fellow Tanzanian Diamond Platnumz. The song earned him a WatsUp Africa Music Video Award for Best African Newcomer Video. Additional singles like “Happy Birthday” and “Sina” followed, but it was 2017’s hooky “Kwa Ngaru,” again with Diamond Platnumz, that served as his breakthrough hit.
After delivering the club hit “Fire Waist”, with Skales and debut EP, Afro Bongo in 2018/19, Harmonize launched his own label, Konde Music Worldwide, and collaborated with artists like Sheebah, Eddy Kenzo, and Phyno before delivering his debut full-length, Afro East, in 2020. According to Apple Music;

Class is in session on Harmonize’s second album, “HIGH SCHOOL” which brings together artists and genres from across the continent. With each track as a serving as school subject, Harmonize (Rajab Abdul) covers love, forgiveness, inspiration and more across 20 tracks. Rooted in East African melodies, High School sees Harmonize widen his syllabus to include more English language lyrics—and a host of collaborators from Naira Marley (“Song”) and Sarkodie (“Why”), to Busiswa (“Sandakalawe”), Ibraah (“Mdomo”) and Sholo Mwamba (“Kamaliza”). STREAM/GET HERE