Nigerian singer, Buju is appreciating Big Wiz for giving him the opportunity to shine this year.

The Lenu artiste took to the bluebird app to sends God’s blessings to Wizkid for everything he has done even after his now-deleted tweets of him trolling resurfaced on Twitter.

Recall how Buju was dragged on social media after his tweets trolling Wizkid, Davido, Burna Boy, Don Jazzy and others surfaced on Twitter. It happened after he announced his collaboration with Wizkid.

Netizens advised Big Wiz not to feature him again, but Wizkid ignored them and went ahead to feature him on his song, Mood off his MIL Deluxe version.

Mood is one of the biggest songs at the moment and has amounted to millions of streams across all music platforms. Buju couldn’t find the right words to thank Wizkid. He wrote; “God Bless Wizkid For me! Sheeshh!!” 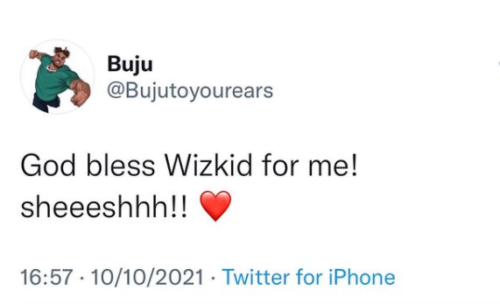