A big congrats to Burna Boy And Polo G, as their joint record, “Want It All” debuts at number 18 on the Billboard world digital song sales chart.

Barely 2 weeks after its release, “Want It All” has already made a debut appearance all the way to the top at number 18 on the world digital song sales chart.

The World Digital Song Sales chart is a weekly record chart compiled by Nielsen SoundScan and published by Billboard magazine.

The spaceship records headliner dropped the song. employing the services of American rapper, Polo G, who is mostly known for his 2018 classics, “Pop out”, and “Finer Things” on the 1st of October, 2021. This comes following the success of his song, “Question” with ace music executive, Don Jazzy. 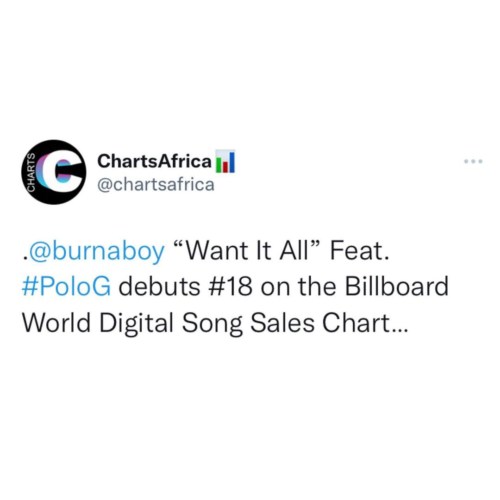