BBN ex-housemate, Cross has received heavy backlash from Twitter users for his new song with Ajebuttter.

The King of cruise and the king of parole teamed up to give their fans a mad banger titled “Feeling Funky”. However, fans- Cross’s fans- got mad that Cross will agree to sing something like that.

Unlike the others who were dragging him, a Twitter user identified as Daniel Regha decided to be the spokesperson of the angry fan club and tell Cross what he did wrong.

According to Regha, ‘Feeling Funky’ has a nice instrumental, but the lyrics were an absolute zero. Without sugarcoating his words, he advised Cross to take a step back and work on his pen game if he plans to succeed in the music industry. Regha is sure that his advice will help Cross from dropping wack songs and provoking his fans again in the future.
Read his tweet below; 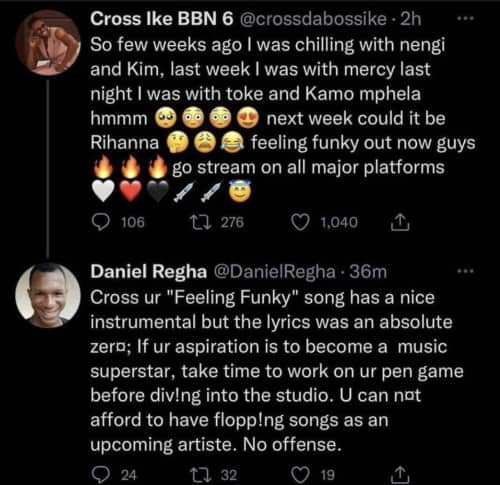