Nigerian singer, Dbanj has reacted to an opinion piece about him and Don Jazzy.

An Instagram user identified as Tunice took a trip down memory to explain what happened between Don Jazzy and Dbanj before Mo’hits disbanded.

According to him, Dbanj saw the future and made the right decision by leaving after he discovered Don Jazzy wasn’t ready to move forward. He recounted how Kanye West gave them the opportunity to make afrobeat on a world stage, but Don Jazzy was carried away by the homeage he got as the best producer in Africa.

He added that Don Jazzy simply wanted to be a big fish in the river, while Dbanj wanted to be a whale in an ocean. When they couldn’t reach a compromise, Dbanj left and the others followed suit.

Reacting to this, Dnaje reposted the piece on his IG story. He left no captions or emojis on the post. This action confused Neztiens who don’t know if he agrees with Tunice or Not. 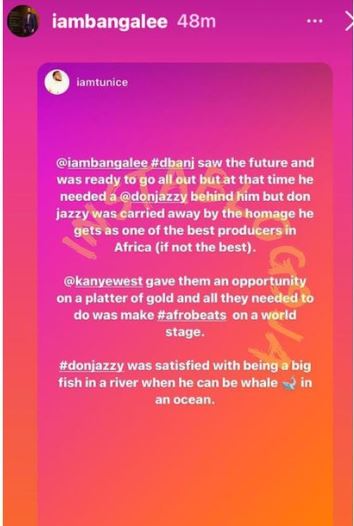