The singer took to his Instagram account to share the good news with his fans and followers. Accoridng to Fireboy, he made a special record with his big brother, D smoke, and can’t wait for his fans to listen to it.

“Made a special record w my big bro @dsmoke7 off his brand new album ‘War & Wonders’ Out now everywhere, go get it!”, he wrote. 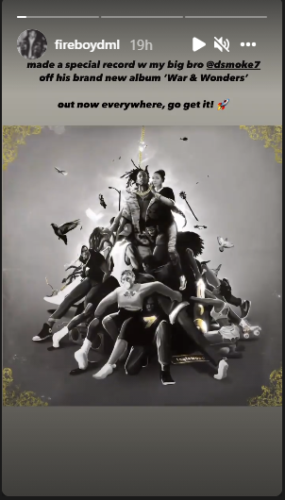 Fireboy’s song on the album is Sleepwalk and it was produced by Telz who shared a clip of his work via his IG account.