Nigerian singer, Brymo has revealed that veteran musician 2baba is yet to drag him to court after failing to tender a public apology.

It would be recalled 2baba threatened to file a #1 billion defamation lawsuit against Brymo over his accusatory posts on Twitter if Brymo fails to apologize within 48 hours. Also recall that Brymo called out 2baba for sending thugs who assaulted him in 2012. According to him, 2baba falsely accused him of sleeping with his wife, Annie Idibia.

Today, the 14th of October, Brymo took to his twitter handle to share that he has not been dragged to court by 2baba. According to him, he is yet to receive anything official or summons to courts from 2baba or his lawyers. 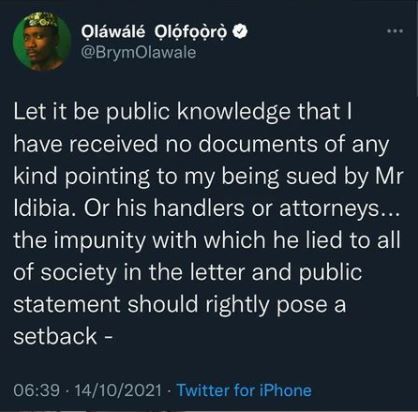