Yesterday, the three apps – which are all owned by Facebook, and run on shared infrastructure – stopped working shortly before 5pm. Internet users who had no idea what was going on took to Twitter to complain. Some continuously restarted their devices and others subscribed for a new data bundle.

After 6 hours that the apps went down, service started coming back online, but the coverage was still spotty. Celebrities and fans took to their various accounts to comment on the issue and how many couldn’t cope or work without the apps.

Reacting to the outage, Spesh expressed disappointment that the apps are working again. According to him, he thought social media was over for good.

Spesh revealed that he thought the world was ending so that everyone, including God, can finally rest. 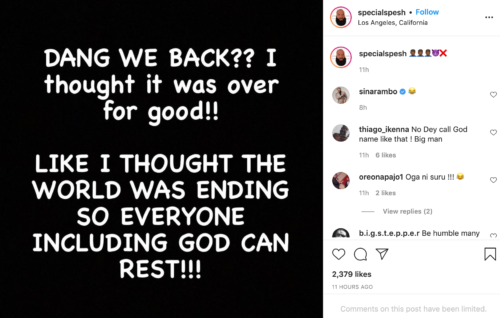