It’s been 2 days since Wizkid sent the internet into a frenzy with his tweet about finding a wife on his US tour.

Wizkid via his Twitter account announced that he is a ‘single dad who is ready to mingle’. Netizens wasted no time in dragging Wizkid’s baby mama and manager, Jada who claimed Wizkid as ‘her man’ a few days before his tweet.

They left so many negative comments about her relationship with Wizkid. Some even had the audacity to tell her that Wizkid can never marry her. Others advised her to help Wizkid find a wife to secure her spot as his closest friend as well as staying by his side.

Reacting to the negative comments, Jada made it clear that she won’t respond to any of them because they do not relate to what she stands for. According to her, if the conversation isn’t about reaching goals and getting money, she is not interested. 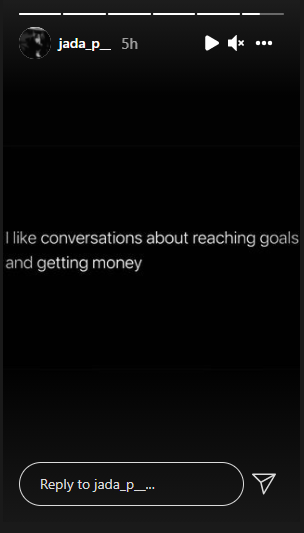