Nigerian singer, Joeboy has pleaded with his fans for the second time in regards to his Alcohol Challenge.

It is safe to say that his plea fell on deaf ears as more videos of people not only pouring but drinking substances like Antiseptics, Bleach, palm oil surfaced online.

Reacting to this, Joeboy took to his Twitter account to plead with fans again. He begged them not to ingest unhealthy things in addition to the rule of not pouring harmful substances on their bodies. Joeboy also warned them not to go overboard with the challenge and allow other people to enjoy the song in peace.

This news is coming hours after Nigerian Twitter users posted that Joeboy should be arrested for starting the challenge in the first place. 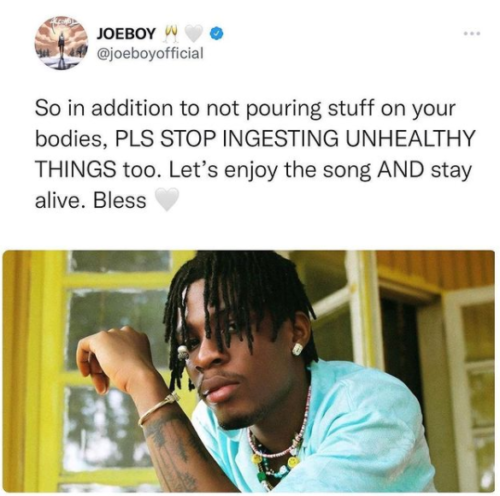 Did Joeboy Tear A Leaf Out Of...