UK Garage, or UKG, is an umbrella term for an array of electronic dance music (EDM) and urban music styles that emerged from the United Kingdom’s club scene in the 1990s.

American artists like Solid Crew, the Streets, Craig David have tapped and are presently dwelling on the sound. An American artiste, Star One wondered what Essence would sound like as a UK Garage track and decided to work on it. He shared a clip on his IG page and comments flew in from different angles.

While some are thanking Star One for the amazing sound and are making inquiries on how they can get a full version of it, others are begging him to leave Essence the way it is. They noted that some songs might need a Garge version, but Essence isn’t one of them.

Read some of their comments below, 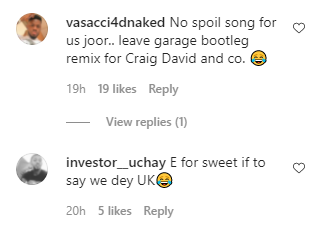