Nigerian artiste, Adekunle Gold has reacted after his song featuring Davido “ High” debuted at 7 on the Billboard Global Thriller chart.

Reacting to the good news, Adekunle Gold took to his Twitter account to celebrate their achievement and also throw in some shades for those who never believed in their collaboration.  AG baby tweeted, “Numbers don’t lie and I don’t shout”  after the chart was updated on billboard’s website. 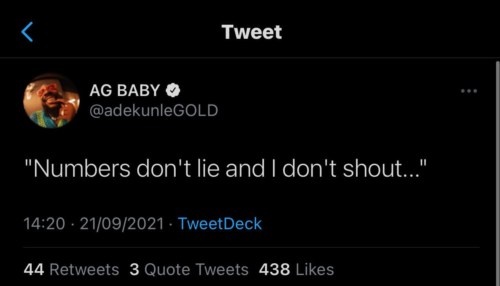 “High” was released on the 4th of September, 2021. It was produced by Pheelz.