The singer took to IG to ask a rhetorical question, but many felt he was referring to the slay queens and Influencers on the aesthetic app. Patoranking, however, wanted clarification on what they intended to do with their lives after taking pictures for the gram.

According to Pato, he is hoping their only goal in life is not to dress up and take pictures. He advised that if that was to be their life goal, that they should sit down and read his post again.

Some internet users who felt attacked were quick to remind the singer that Kim Kardashian, Kylie Jenner, and others make money from dressing up and posting photos on IG. Patoranking also reminded them that those mentioned have businesses and only see influencing as a side hustle unlike our slay queens who see Instagram as a full job. 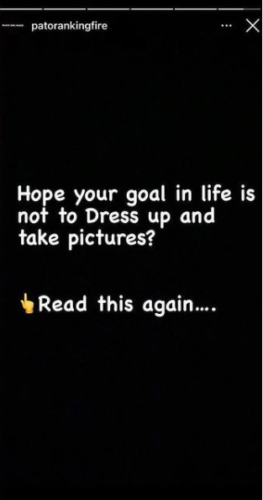