Afrorave singer, Rema has issued a strong warning to his fans to never disrespect his senior colleagues again.

In a series of tweets, the 21-year-old artiste addressed the disrespect Ravers have been dishing out to his senior colleagues all in the name of having his back. According to Rema, such loyalty and support is disrespectful and will never be appreciated.

He informed his fans that they are allowed to defend him in public, forewarn him of any plan to tarnish his image or ruin his reputation, but they should never start an agenda to bring down his brothers in the industry.

Rema made it clear that he wants to play a decent part in his history and he is speaking out to prevent his name from being associated with any social media drama. He pleaded with his fans not to engage in any social media drama in an attempt to defend him. According to him, “if some people are insecure about his success, let them choke”
He concluded by thanking the OGs that paved the way and the ones who always inspire him to be a better version of himself. 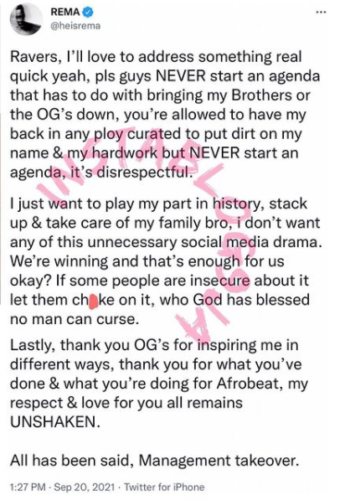