Nigerian singer, Ric Hassani has revealed what pushed him to get his cook a new phone.

The African Gentleman took to Instagram to share with his followers how he bought a new phone for his cook because he hated his ringtone. According to him, his cook had one of those small phones that comes with loud and annoying ringtones #smallbutmighty

In Ric’s words, it sounded like one of those ‘Korean Cultural dance’. He disclosed that the phone made him angry whenever it rang because it was stressing his deep thoughts. He finally got his peace and quiet back after he bought the phone. 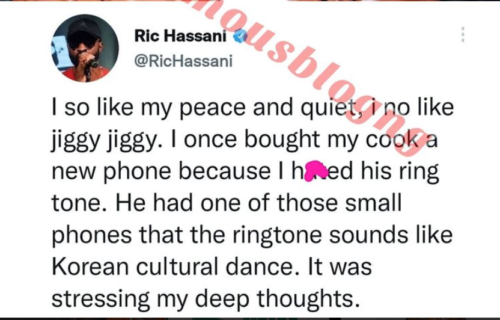 Ric Hassani Opens Up About Finding A...