Nigerian artiste, Rudeboy has shared what he did to the policemen he met in Lagos Island last night.

In his post on IG, Rudeboy revealed that he refused to give them a bribe. According to him, he stood his ground following the traffic they caused.

Sharing his story, Rudeboy revealed that he was coming back from a club only to meet barricades on the road. According to him, they blocked the road and were extorting people.

He disclosed that his anger isn’t about the #EndSarmemorial, but the fact that one won’t find them at Third Mainland bridge where people have been robbed on several occasions

Rudeboy mocked them for only knowing how to collect bribe and not doing their jobs. He informed them that from now henceforth, they won’t receive a dime from him. 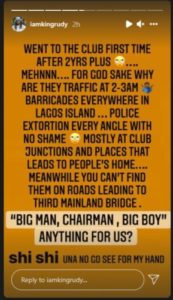