Nigerian songstress, Simi has often found herself at the sharp end of negative comments, but fortunately for her, she knows how to give an epic clap back.

Simi made her fans proud after she trashed a troll who said she has fallen off the radar. According to him, Simi has been replaced by Mavin’s newbie, Ayra Starr, and no longer adds value to the music industry.  He advised Twitter users to listen to Ayra Starr and forget about Simi. His tweet was a response to Simi’s tweet of being a more ‘talented artiste’ other than Johnny Drille.

Reacting to his insult, Simi asked him a very simple question. She asked the troll to provide his father who didn’t fall off but he is still not relevant. In her own words, “Ur papa wey no off, where he dey?” 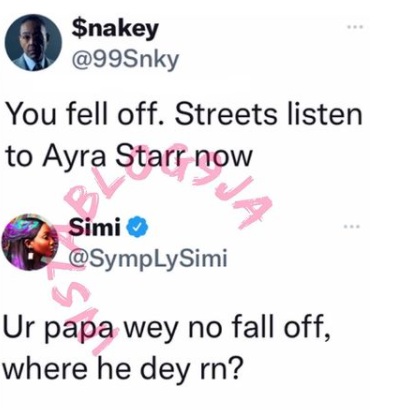