Paris St-Germain manager Mauricio Pochettino and sporting director Leonardo are working on closing a deal to bring Argentina forward Sergio Aguero to the French capital when the 32-year-old’s time with Manchester City comes to an end in the summer. (Todo Fichajes – in Spanish)

Barcelona, however, are seen as favourites to land four-time Premier League winner Aguero, who has also been linked with Real Madrid and Juventus. (Manchester Evening News)

Liverpool and Egypt striker Mohamed Salah, 28, has said that it is possible he could leave Anfield for a move to Spain in the future. (Marca – in Spanish)

Manchester United, Liverpool and Tottenham are battling it out to sign Austria midfielder Marcel Sabitzer, 27, from RB Leipzig. (Bild, via Sun)

Everton are ready to listen to offers for 26-year-old Colombian defender Yerry Mina, with the Toffees keen to generate money as they consider a bid for Napoli’s 29-year-old Senegal centre-back Kalidou Koulibaly. (Football Insider)

Manchester City are not interested in signing Bayern Munich defender David Alaba, despite being regularly linked with the 28-year-old who will leave the German giants in the summer. (Manchester Evening News)

Chelsea and Paris St-Germain have been named as potential destinations for Austria defender Alaba after his agent Pini Zahavi played down suggestions that only Real Madrid and Barcelona are in the race to sign the 28-year-old. (Diario AS, via Mail)

David Beckham-owned Inter Miami, the US side managed by Phil Neville, is up against Major League Soccer rivals DC United in the race to sign former England, Liverpool and Chelsea striker Daniel Sturridge, 31, who has been a free agent since leaving Turkish side Trabzonspor in March 2020. (Mirror)

Barcelona have offered a three-year contract to Liverpool’s Dutch midfielder Georginio Wijnaldum, 30, who will be a free agent at the end of the season. (Mundo Deportivo – in Spanish)

Juventus’ Italian goalkeeper Gianluigi Buffon, 43, is considering another season away from Serie A before retiring. (Gazzetta Dello Sport – in Italian)

The football club of the future?

Meet the Spanish football club owned by an esports team.

Juventus have joined Tottenham, Chelsea and Atletico Madrid in the race to sign 20-year-old Brazilian midfielder Gabriel Menino, who could be allowed to leave Palmeiras for as little as £13m because of financial pressures on the club. (Mundo Deportivo, via Team Talk)

German forward Timo Werner, 25, is confident he can turn his fortunes at Chelsea around and is determined not to leave Stamford Bridge after just one season, having been linked with a possible move to Borussia Dortmund as part of a swap deal for Erling Braut Haaland. (Goal)

Sheffield United are finalising a shortlist for their new manager, with ex-Watford and Fulham manager Slavisa Jokanovic, 52, and his former assistant Javier Pereira, 54, among their preferred targets. (Sheffield Star)

French defender Malang Sarr, 22, will return to Chelsea at the end of his loan deal with Porto at the end of the season, with both the Portuguese club and player opting against making the move permanent. (Record, via Sport Witness)

German champions Bayern Munich will not extend on-loan Juventus midfielder Douglas Costa’s second spell at the club beyond the end of the season. The 30-year-old Brazil midfielder has made just three Bundesliga starts this season. (Goal)

Arsenal are the latest club to show interest in signing Fiorentina forward Dusan Vlahovic, 21, joining the likes of Tottenham, AC Milan, RB Leipzig, Roma and Atletico Madrid in pursuit of the Serbian. (Calcio Mercato – in Italian) 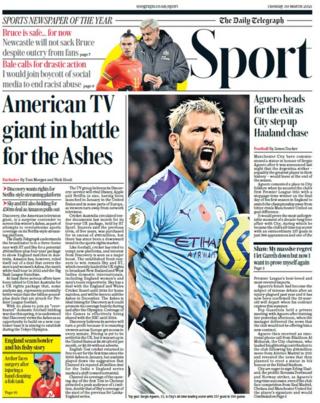 The Daily Telegraph’s back page on Tuesday