Despite the breakdown in those talks, Manchester United are not ruling out another move for England forward Sancho, 21, this summer.

‘I am here to win games and win titles’

Manchester United have revived their interest in Lazio’s Sergej Milinkovic-Savic. The 26-year-old Serbia midfielder is also of note to Real Madrid and PSG.

Tottenham are set to make a move for Bayern Munich defender Jerome Boateng. The 32-year-old Germany centre-back will leave the Bundesliga giants at the end of the season.

Tottenham will prioritise strengthening their defence this summer but must sell players first to raise funds.

AC Milan are determined to sign 23-year-old England and Chelsea centre-back Fikayo Tomori, who is currently on loan at the Italian club, on a permanent deal.

Chelsea’s hopes of signing 22-year-old goalkeeper Gianluigi Donnarumma have been boosted with the news that contract talks between the Italian and AC Milan have stalled.

Eddie Howe, Frank Lampard and Burnley boss Sean Dyche are on Crystal Palace’s shortlist to replace Roy Hodgson as manager. Hodgson’s contract expires at the end of the season.

Bayern Munich are interested in Spain defender Lucas Vazquez, who may not play again for Real Madrid. The 29-year-old’s knee injury may keep him out until the end of the season, when his contract runs out.

Juventus are keen on signing Barcelona and France forward Ousmane Dembele, 23, when his contract expires in 2022.

Premier League clubs are considering a blanket social media boycott for one round of fixtures to send out a message that racism will not be tolerated. (Mail) 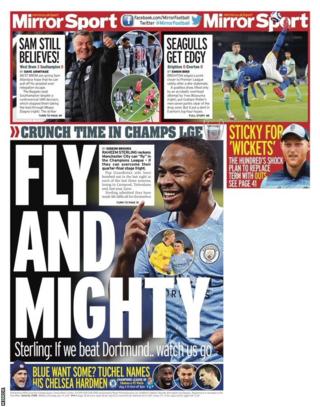 The back page of Tuesday’s Mirror