Chelsea will consider a move for Belgium and former Blues striker Romelu Lukaku, 27, if they are unable to sign Norway striker Erling Braut Haaland, 20, this summer. (Telegraph)

Manchester City are also interested in Lukaku, who has scored 59 goals in 85 appearances for Inter Milan. (Calciomercato, via Manchester Evening News)

Haaland’s transfer fee this summer has been set by Borussia Dortmund with interested clubs needing £154m in order to have a chance of signing the striker. (ESPN)

Senegal striker Sadio Mane, 28, has dropped a huge hint that he intends to stay at Liverpool – even if Jurgen Klopp’s side fail to make next season’s Champions League. (Sun)

Sevilla and Roma are interested in Arsenal and France forward Alexandre Lacazette, 29. (ESPN)

Paris St-Germain are hopeful that Brazil forward Neymar, 29, will sign a four-year contract extension, but Kylian Mbappe’s future is uncertain. The France forward, 22, is out of contract in 2022. (Marca)

Manchester United are open to a return this summer for 28-year-old England midfielder Jesse Lingard, who is currently on loan at West Ham – and there could be talks over a contract extension. (Sun)

Manchester United have made an approach to sign Atletico Madrid’s Spanish midfielder Marcos Llorente, 26, for £68.5m. (AS)

Liverpool manager Klopp has made one final plea to the club’s owners to come to an agreement with Dutch midfielder Georginio Wijnaldum, 30, over a new contract. (90min)

The Reds are also leading AC Milan and Juventus in the race to sign PSV’s Dutch striker Donyell Malen, 22, this summer. (Gazetta dello Sport, via Mail)

Arsenal are the favourites to sign Real Betis forward Nabil Fekir. The Frenchman, 27, has also been linked with Liverpool and Barcelona. (Tuttomercato – in Italian)

Newcastle United’s Paraguay midfielder Miguel Almiron, 27, has admitted he would like to ‘play in a team that fights more’ amid speculation over his future on Tyneside. (Chronicle) 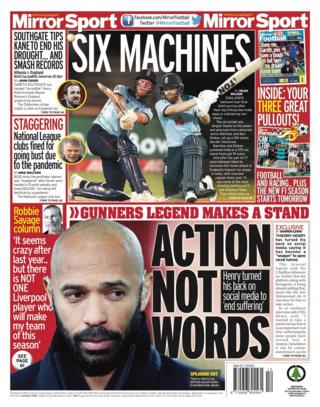