Arsenal have no chance of signing Real Madrid loanee Martin Odegaard, 22, on a permanent deal, with the Spanish giants still seeing the Norway attacking midfielder as a key part of their long-term plans.

Liverpool’s Dutch midfielder Georginio Wijnaldum, 30, will need to wait until Barcelona offload Bosnia midfielder Miralem Pjanic, 30, before he can seal a move to the Nou Camp. (Sport, via Mirror)

Liverpool are considered the favourites to land PSV Eindhoven forward Donyell Malen, despite interest in the 22-year-old Dutchman from Italian giants Juventus and AC Milan. (Gazzetta Dello Sport via Goal)

Manager Ole Gunnar Solskjaer, 48, is in line for a new contract even if Manchester United end the season without winning a trophy. (Telegraph – subscription only)

Sheffield United owner Prince Abdullah says he did not want to sack Chris Wilder and claims the former Blades boss asked for a £4m fee to resign. (Sky Sports)

The perfect ending to an illustrious career…

Roma legend Francesco Totti, 44, can now operate as a sports agent after completing his registration in Italy. (Gazzetta dello Sport – in Italian)

Coach Zinedine Zidane’s future at Real Madrid beyond this season remains unclear, amid interest from the French Football Federation. The 48-year-old Frenchman is under contract until 2022. (AS)

Egypt have declared they want Mohamed Salah to form part of their final squad for the Olympic Games this summer, which means he would miss Liverpool’s pre-season. (Daily Mail)

Liverpool have reignited their interest in Real Betis and France forward Nabil Fekir, who was close to joining the Reds in 2018. However, Inter Milan and Rennes are also interested in the 27-year-old. (Estadio Deportivo – in Spanish)

Southampton centre-back Jannik Vestergaard, 28, says it is “always a pat on the back” to be linked to other big clubs after reports Tottenham are interested in signing the Denmark international. (Tipsbladet via Daily Echo)

Manchester United hope Portugal’s Bruno Fernandes can help lure his compatriot Pedro Neto, 21, to Old Trafford from Wolves, with winger expected to cost as much as £40m in the summer. (Football Insider)

West Ham and Crystal Palace are both interested in signing 30-year-old midfielder Aaron Ramsey, with Juventus keen to offload the Wales international along with French midfielder Adrien Rabiot, 25, who is is being linked with Manchester City and Barcelona. (Calcio Mercator – in Italian)

Benfica have distanced themselves from reports saying they are close to signing Spanish forward and ex-Chelsea man Diego Costa, 32, who has been without a club since leaving Atletico Madrid in January. (Mail) 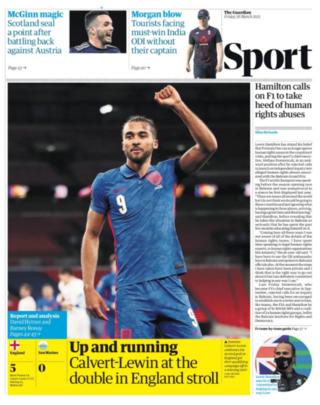 The Guardian’s back page on Friday