Baba Nla has given credit to Afro-Spiritual crooner, Bella Shmurda, whose real name is Akinbiyi Abiola Ahmed for his vocals on his song, Anoti off his made in Lagos deluxe album.

The Grammy-Award-winning hitmaker, Ayodeji Balogun, whose is widely known as Wizkid released his Made in Lagos deluxe today, 27th of August, 2021, and had initially teased about a Bella Shnurda feature but to the surprise of his fans, there was no such thing.

However, he took to his social media page earlier today to give credit to Bella Shmurda for his backup vocals on the album.

He wrote, “After I finished writing ‘Anoti”.. my brudda Bella Shmurda spiced it up with some lovely backup vocals! Thank You!”

This is an obvious attempt to clear the air and to let his fans know that although there was no proper feature, Bella still had a place on his deluxe album. 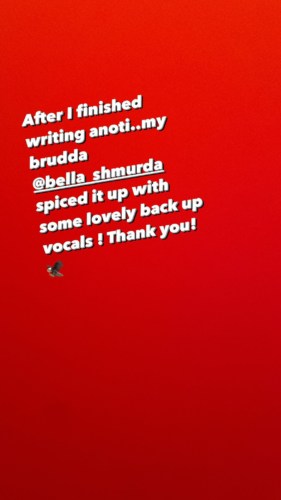