Nigerian singer, Wizkid is trending on Twitter, and no, it’s not related to Essence or a Grammy award.

The singer found himself on Twitter trend tables after announcing that he is looking for a wife. According to Wizkid, he prays he finds a wife on his MIL tour in the US.

After his post surfaced online, Fans and haters took to the app to share their candid opinions about the issue. Some left comments like ‘Wizkid is using them to catch cruise’ and Jada knew ‘Wizkid was never going to marry her’.

Following the comments, a fan wrote a thesis on Wizkid and Jada’s relationship. According to her, Wizkid is aware that Jada is bigger than the wife tag. She stated that Jada is very smart and obviously knows her place in Wizkid’s life, unlike his other baby mamas. The fan added that Jada has silently been winning by Wizkid’s side, unlike his other baby mamas who made it their mission to make him their enemy.
Read her thesis below, 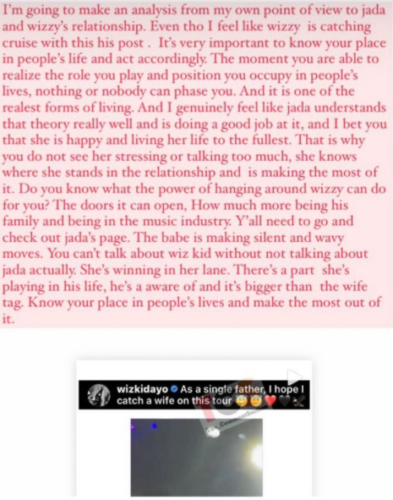